Chop saws and miter saws are incredibly similar saws, but their slight difference makes a big difference during certain jobs. If you have been considering purchasing either one, its good to learn the differences, that way you understand which is the better tool for the job.

Chop saws are very similar to miter saws. They look and function alike. The cutting function on both saws works when a round blade is pulled down by the user. This cuts the material from the top. Chop saws are normally used in commercial applications or industrial shops since they are fantastic for cutting large amounts of materials quickly and efficiently. Because of this, they are designed with much more powerful motors than miter saws.

For the average do-it-yourselfer performing home improvements, a high-quality miter saw is a much better choice. Buying a 10″ or 12″ miter saw will allow you to make many more types of cuts than that possible with a chop saw. Chop saws are “rough cut tools.” Chop saws cannot make polished cuts such as the cuts needed for interior trims, moldings, or doors/picture frames. For general woodworking, be it in a shop or home garage, a miter saw is a proper choice.

Since Miter and Chop saws are so similar, to understand the big picture, it’s better to appreciate their differences.

What will be your primary use when buying a chop saw or miter saw?
Miter saw = for general woodwork and general DIY use. Chop saw = cutting metal and fabrication.

Miter saws can make angled cuts. Why do you think its called a “miter saw”? On the other hand, the chop can only make cuts that go straight down in a 90 degree.

Some less critical differences are that the miter saws are smaller more portable saws. Miter saws usually have 7″-12″ inch blades while the chop saws smallest blade is 14 inches. Chop saw blades are notably rough. They are made to cut through most materials easily, but the cut will definitely not be a “finished cut,” while miter saw blades are intended for making and fishing cuts.

We have previously explained that chop saws are robust saws. If your primary use for the saw is cutting steel and metals, chop saws would be the tool you need and would be what we would recommend.

Almost every chop saw in the market comes with an abrasive metal cut-off disc blade, though there are now some companies that offer general purpose “cold-cut” blades for chops.

An abrasive cut-off blade or general purpose “cold-cut” blade?
Abrasive blades create a lot of heat and a lot of sparks while throwing debris everywhere. A cold-cut saw blade is called “cold” because it will cut through the same material as an abrasive with limited heat and much fewer sparks. The material that has been cut is usually cool to the touch immediately after being cut.

Sparks or no sparks? The blade makes a big difference. Check out the difference between an abrasive and cold-cut chop saw in this picture: 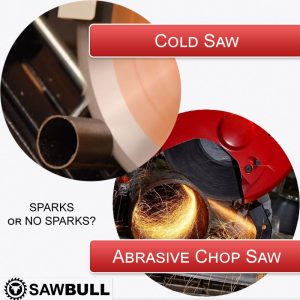 Since chop saws are utilized in industrial applications, some can be impressively large. But in reality, the most commonly found chop saws are around 14″ inches.

Earlier we talked about the most significant difference between miters and chop saws was that miters are designed to make angled cuts. This characteristic is their primary purpose, and they are a required tool for any kind of framing work or general woodworking.

A miter saw is actually called a “compound miter saw.” Their blade can be leaned on the x-axis giving you the ability to make many more types of cuts that any chop saw. We recommend most DIYers get a 10 or 12 miter saw since the 7″-8″ models can be impractical for most work around the house.